Everything should be made as simple as possible — but not simpler.

My goal is a movie camera that can be used for any professional assignment:

Manual rings for iris, zoom, and focus (but also a motor on the zoom for the rocker button). I find that my brain-to-hand connection is faster than any autofocus. Besides, autofocus and autoiris don’t take into account artistic considerations. Maybe I don’t want what’s dead center to be the object in focus. Maybe averaging the brightness of the whole frame to middle gray is not the most beautiful — or even the clearest.

Super-35mm is by no means an extravagantly large sensor. In fact it is less than half the area of the 35mm frame we all used to take snapshots with. It is much bigger than common video chips, because they’re tiny.

Did you know that the common video chip sizes are not even what they say they are? For historical reasons, video chips are smaller than their namesakes. For example, the 1/3" chip is only 1/5" diagonally.

A Super-35mm sensor brings judicious depth of field, exposure latitude, and low-light sensitivity. To those who are skeptical, as I was, of a single Bayer sensor instead of a three-chipper, check out the imagery from the Red One, Dalsa Origin, or Arri D-20. Adam Wilt also points out that the lens is simpler (smaller, cheaper).

Some digital movie cameras see in 4K (4,000 × 2,000 pixels). But the HDTV spec — about 2K — was decided after examining what the human eye might make out at three times the picture height, which is the recommended viewing distance from a movie screen. Since it is ¼ the number of pixels as 4K, it has 4× the light sensitivity, exposure latitude (about two F-stops), and recording time.

This should go without saying, but apparently it doesn’t. Most CMOS sensors employ a rolling shutter instead, which yields distortion in shots that have quick movement. A global shutter reads all pixels at the same time, for a true slice of time, instead of taking one row at a time.

By 0, I really mean time lapse, like one frame every minute, hour, day, and so on. And on the upper end, 240 frames per second is a suggestion. There really is no upper limit. Give us more frames per second, I’m sure we’ll use them — say, to stop a bullet.

Some people ask what to do about sound when shooting slow motion. Why not record it at the same speed? Then you could have one of those slow-motion shots where a character is yelling "Nooooooo!" without dubbing in the "Nooooooo!" later. You just shoot the character yelling "No!" in slow motion. I’m sure moviemakers would use high-speed sound recording for all sorts of effects and even scientific analyses.

To record real-world lighting situations, you need about 12 F-stops. The good news is, digital sensors already have close to that, as Roger N. Clark shows in his comparison of a digital camera and film.

Digital sensors have low noise and so withstand a great deal of boosting in post. I’m not saying that a image boosted to ISO 25600 will be free from grain. It will have a lot of noise. But it should be usable up to that point. Maybe not for a glossy feature, but at least for some shots in a documentary.

The analog-to-digital converter converts analog voltages that have been read from each pixel into a digital value. As Norman Koren describes in his article “Tonal quality and dynamic range in digital cameras,” a linear ADC leaves too few bits to define the darker zones, leading to banding. A logarithmic one distributes bits evenly across all zones, because F-stop zones themselves are logarithmic.

Ten bits of logarithmic data, when unfurled, is as effective as 19 bits of linear yet takes half the space.

Soft focus cannot be fixed in post. Therefore having a screen that has the same resolution as the sensor is critical. It need not be full color. Coloring is done in post anyway. So, if the screen were to use a Bayer pattern, like the sensor, then we already have displays with the pixel density for 2K on a 5" screen.

“Administrative debris,” as Edward Tufte calls it, should be kept to a mininum, so as to not distract from or block the image. Use thin lines, small fonts, few words. Let the menu be shallow: tap a spot to bring up a control, tap again on an X or something to make it go away. Nothing buried several choices deep, especially if it is changed much.

Labels can be left off by making them obvious. For example, the audio meters are obviously audio meters. The meters for the memory cards and battery time are arranged just as the pieces themselves are on the camera body.

The two main settings controlled through the screen are frame rate and shutter speed. Tap the numbers in the upper right, and up pops this control. 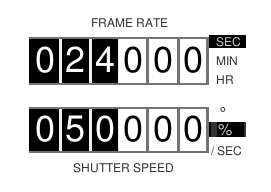 You can move each digit with your finger, and it rolls like an odometer. You can also change measurements, and the current numbers convert automatically. Such a control would let you choose from a wide range and fine degree of frame rates and shutter speeds quickly.

XLR works well and is widespread. Adapters — even mini-XLR to XLR — are a point of failure. Many jobs will take fewer than four of them, but performances, weddings, and other ceremonies often need three or four. Not more than four, though, because then it is too much for the cameraman to keep track of. That’s when you hire a sound recordist.

If NAB is like CES this year, where every new camcorder uses memory cards, then I won’t need to defend solid state. The frailties of moviemaking are enough without crinkled tape, gummed heads, and dropped frames.

Now the best number of memory slots is two. With more than one, you can shoot endlessly, swapping out the full card while the other records. But with more than two, the complexity outweighs the benefits.

Oh, and please wrap the footage in an open format, like MXF, not a private one. It is important that the files instantly import into a wide variety of editors.

Firewire can carry video, audio, power, and remote control commands through one jack. Perfect simplicity. As an open and common standard, the camera will work with more things than any private, company-owned standard.

If only USB carried enough power, it would be even better, since it is even more common.

By keeping the camera simple, you can also keep the price down. Few, if any, pieces are exotic, although this particular collection and arrangement is unique. Now that such small motherboards like the Mobile ITX have come out, you might even be able to base the camera on common computer parts.